Ricky, the Rock that Couldn’t Roll

Get ready to meet a new rock group! From zippy, little pebbles to big strong boulders, the rocks get together to play and roll around their favorite hill, only to find that one of their friends, Ricky, can’t roll with them. Unlike all of the others, who are all round, Ricky can’t roll because he’s flat on one side.

Determined not to leave their friend behind, the rocks set out to help Ricky roll around – one way or another. This sweet, imaginative picture book, written in verse, brings a fresh set of characters to life in a story that highlights perseverance and triumph in the face of adversity, and the power of true friendship. 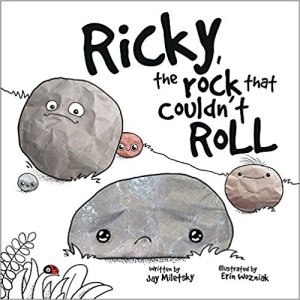 This cover is simple done right. I was privileged to watch this book as it moved through the development process, and it’s amazing to see the final product. The key characters take center stage – full of expression – giving buyers a clear idea of what the story is about. This is harder to accomplish than you might expect, and the illustrator/designer pulled it off very well. The title font choice is excellent, and LARGE enough!

The artist made some very creative choices in illustrating this book. Rather than sticking to the standard mediums, she incorporated various crinkled paper textures. Each rock character has a different texture/color of crinkled paper. It even looks like she may have used a fine grit sandpaper in some cases.

This technique is downright brilliant, and it brings the entire story to life. There’s not a whole lot of color on each page otherwise – the scenery is simple line art – but this approach delivers an almost tactile experience.

Of course, I haven’t even touched on the fabulous characters. Each rock is unique and adorable, packed with personality, and wildly expressive. I flipped through this book (looking at the pictures) half a dozen times before I even read the text!

That’s not to say the story isn’t great all on its own – because it really is. It’s a rhyming book, but very well written. The meter is excellent, rhymes are on point:

“Kai was a meteorite and not from this planet
and Maya was lava but taken for granite.”

And whaddaya know? There’s a lesson here too. But it’s communicated wonderfully, without feeling forced or “teachy.” This book is great for any kid who needs a boost of determination, motivation, and empowerment:

Jay Miletsky is a reformed business author who has turned his attention to the far more creative, exciting and more competitive world of children’s picture book writing, starting with “Ricky, the Rock that Couldn’t Roll.” He’s currently working on more books featuring this unique cast of playful and memorable characters, along with other, independent titles such as the soon-to-be-released “Beware of the Nose-Biting Monster (a Cautionary Tale for Petrified Parents),” and he’s dreading the day when he runs out of new story ideas.

In the meantime, Jay lives in New Jersey, where he gets all of his creative inspiration from his amazing and beautiful daughter, Bria. He’s an adjunct professor at Pratt Institute, where he teaches online business and social media marketing, and is the CEO of Sequel Media International, which publishes PuckerMob.com – one of the largest female-focused, viral content sites that focuses on love, life and relationships.

Jay graduated from Brandeis University with a BA in Economics, and still wishes he never left Boston.